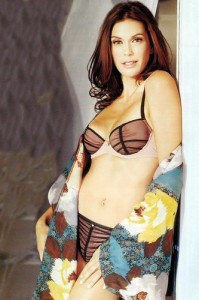 50. George Clooney sometimes sleeps in the walk-in closet of his LA mansion because, he says, “all the bedrooms are too light”.

49. In 1985, Teri Hatcher played a dancing mermaid on The Love Boat. “That was the first job I ever had” she says. “I left college before finishing my math degree to go do that”.

47. Matthew Perry is missing part of his middle finger on his right hand due to a door-shutting accident.

46. Diane Lane’s mom, Colleen Farrington, was playboy’s Miss October 1957 (the ex playmate was also pregnant in one of her photo shoots)

45. Early in her career, Whitney Houston sang the jingle used in commercials for Bounce fabric sheets.

44. A childhood virus left Rob Lowe completely deaf in his right ear. “No stereo for me” he says “It’s a mono world”.

43. Even though she appears in ads for Tommy Hilfiger’s True Star fragrances, Beyonce is reportedly allergic to perfume.

42. After Drew Barrymore posed for Playboy in 1995, Steven Spielberg sent a note that said “cover yourself up” along with a quilt and a copy of the magazine with all her pictures altered so that she appeared fully clothed.

39. Before becoming an actress, Aussie Naomi Watts worked as an assistant fashion editor at a fashion magazine called Follow Me.

38. Colin Farrell says that Marilyn Monroe was the first woman he fell in love with. “I used to leave Smarties, the Irish equivalent of M&Ms, under my pillow with a little note saying, “I know you’re dead but these are very tasty and you should come and have a few. i wont tell anyone”

37. Gwen Stefani admits that she’s had only two boyfriends in her life: No Doubt band mate Tony Kanal and husband Gavin Rossdale.

36. As a 2nd grader Jamie Foxx was so talented at telling jokes, his teacher used him as a reward. If the class behaved, Jamie would entertain them.

35. Butt-Kicking Kill Bill siren Uma Thurman is a crafty one. “I knit” she admits, adding “I love glue gun projects”

34. Keira Knightley was Queen Amidala’s decoy in Star Wars: Episode 1 though the film was promoted as if Natalie Portman played both roles.

33. Though Christina Aguilera is of Ecuadorian descent and recorded an album in Spanish, she doesn’t speak the language. I gathered that when she said mai gousta kantaar

32. In 1993, Jessica Simpson tried out for the Mickey Mouse Club but panicked after watching Christina Aguilera audition. “I froze and forgot everything” she says. She lost out to both Christina and Britney Spears.

31. Eva Longoria starred in the 2004 flick Carlita’s Secret, a crime drama in which she shared a same-sex smooch with actress Maria Bravo. “It was the most fun i’ve ever had kissing somebody”.

30. In the early 70s, Richard Gere played Danny Zuko in a London production of Grease.

29. Tom Cruise admits that he still does the Risky Business underwear dance when hes at home alone. He calls it his “dance of freedom”.

28. As a child, Jim Carrey wore tap shoes to bed just in case his parents needed cheering up in the middle of the night.

27. Christina Applegate attended the 1989 MTV Movie Awards with Brad Pitt, but dumped him at the event and left with someone else. “We were really good friends when I was about 16. We went to the awards and I ditched him! I left him there and I feel really bad about it…I really really do. I left with somebody else”

26. In a high school talent show, Matt Damon performed the talking heads’ “Burning Down the House”

25. Mariah Carey was nicknamed “Mirage” in high school because she never showed up for class.

23. Catherine Zeta Jones’ father owned a candy factory, but the star says she rarely indulged: “I had so many sweets and candy hanging around my house that I never even bothered with them”.

22. Comic actor Jack Black is the son of rocket scientists. His mother worked on the Hubble telescope, and his father worked on “some stuff that i can’t tell you about,” Jack says.

21. Jennifer Love Hewitt sent Matt Damon an inflatable bed because she read he didn’t feel like he has a bed of his own. She never heard back and now, he “looks at me a little weird”.

20. At the age of 7, Reese Witherspoon appeared in a television commercial fora local Nashville Florist.

19. Paris Hilton has size 11 feet! “All those super cute shoes like Guccis and Monolos look like clown shoes on me”

18. Russell Crowe was once a pompadoured singer named Russ Le Roq. His first single was “I want to be like marlon brando”…even though he’d never seen a Brando movie when he wrote the song.

17. Madonna is related to both Gwen Stefani and Celine Dion. Gwen’s great aunt’s mother-in-law shares the same last name as Madonna Ciccone and an ancestor of Madonna’s mother was married to a distant relative of Celine’s dad.

14. Julia Roberts’ left eye tears up when she gets nervous.

13. Struggling actress Charlize Theron landed her first agent in a bank. He signed her after witnessing her throwing a fit at a bank teller who refused to cash her check.

12. When he was little, Ben Affleck asked his mom for a dog and she tested him by making him walk an imaginary pup for a week. In the end, he only lasted five days and didn’t get the dog.

11. Brittany Murphy claims she started speaking at 4 and a half months. She also says she was a very “energetic child, really bubbly…extremely precocious”

10. Demi Moore, who has earned up to 20 million per movie, first found work as a bill collector

09. Heidi Klum is an avid painter and several of her works have appeared in US art magazines.

08. Daryl Hannah is co creator of the board game Liebrary

07. Both Olsen twins had to wear fake teeth during the later years of Full House because their smiles began to look different.

06. In 1985, a four year old Alicia Keys appeared on The Cosby Show as one of the guests at Rudy’s slumber party.

05. Usher holds the Star Search record for the longest note by a child: 12.1 seconds

04. Claire Danes has a swing in her apartment. “My parents had a swing, a trapeze and a trampoline in their apartment, I was inspired by that”

02. Halle Berry used to date New Kid on the Block Danny Wood. They broke up because the band thought she was a groupie.

01. Brad Pitt belonged to the Key Club and the Forensics Club in High School, and before he became an actor he supported himself as a chauffeur, a furniture mover and a costumed mascot for the restaurant, El Pollo Loco.