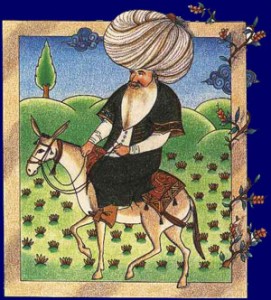 This story concerns the legendary sage Mulla Nasruddin, whose humourous tales contain a delightful down to earth wisdom which cross cultures and centuries. Many different middle-eastern regions claim him to be their own, where the ever popular Nasruddin is often shown besting his worldly superiors. As in the following anecdote, he somehow always manages to score the winning point.

The Sultan of Arabia had grown very fond of Mulla Nasruddin and often took him along on his travels. Once, while on a journey, the royal caravan approached a small nondescript town in the desert.

On a whim, the Sultan said to the Mulla, “I wonder if people would know me in this small place. Let us stop my entourage here and enter the town on foot, and then we’ll see if they can recognize me.”

Accordingly, they dismounted and walked down the main road of the dusty town. The Sultan was surprised to see that many people smiled at Nasruddin, but ignored him completely.

Irritated and a trifle angry, he said, “I see that the people here know you but they don’t know me!”

“They don’t know me either, Your Excellency!” replied the Mulla, innocently.

“Then why did they only smile at you?” questioned the Sultan.

“Because I smiled at them.” said Nasruddin, smiling.

This simple tale beautifully portrays how the simplicity of a childlike smile can speak more than worldly finery and authority. Often we may believe in the power of our intelligence, or our ability to impress or argue a point, but fundamentally when we express the five human values as ‘love in action’ we will more often than not receive a response from people’s hearts and create little miracles of love. Sometimes the silent strength hidden in our soul can blossom forth in a simple smile – try it!