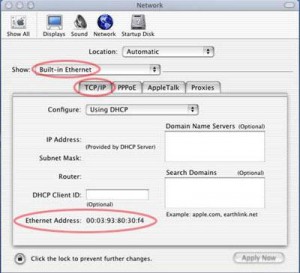 What is Your MAC Address?

No it is not the address of your friendly neighborhood McDonalds! Your MAC (Media Access Control ) address (also known as your Ethernet Hardware Address (EHA), adapter address, or physical address) is a unique identifier assigned, in most cases physically printed, on most network adapters or NICs (Network Interface Cards) or LAN (Local Area Network) cards and managed by the IEEE (Institute of Electrical and Electronics Engineers) in one of three spaces — EUI-48 (Extended Unique Identifier), EUI-64, and MAC-48.

IP (Internet Protocol) addresses identify a computer on the Internet or on a LAN. Computers or devices on the same local area network may share the same IP address but they are identified by their MAC address. For instance, computers or devices in an office intranet are part of the 192.168.3.x subnet, with IP addresses like 192.168.3.100 and 192.168.3.101. The router that connects that office to the Internet has the IP address 192.168.3.1. Think of it as different house numbers on the same street or different room numbers on a hotel floor.

Why is Your MAC Address Important

It is very important to know the MAC address of your computer or device — especially when setting up or fixing a network connection. Some networks restrict access to only those computers they know, so the network asks for the computer’s or device’s MAC Address. For example, you may need to provide the MAC address of your laptop or pocket pc before you can connect to a wireless network. More often though, MAC addresses are used to match a software license key to a specific machine. At the network programming and administrative level, however, MAC addresses become increasingly important – especially when allowing DHCP (Dynamic Host Configuration Protocol) to assign static IP addresses.

Since MAC addresses act as a seamless transition between the physical and network level, they appear in and are used for everything from level 2, Link (Data Link), up in the OSI (Open Systems Interconnection) model. Originally, no two MAC addresses were the same and it was very hard to fake — just like it is very hard to find a room across the hall with the same door number as yours. However, with many new programs publicly available, this theory is becoming quite diluted. While there are many legitimate reasons to temporarily change a MAC address, for testing the security of a network for example, it’s always a good idea to verify as much as possible so that no one can bypass MAC filtering, sniffing other connections (a form of online identity theft), or hide deviant behavior such as service attacks.