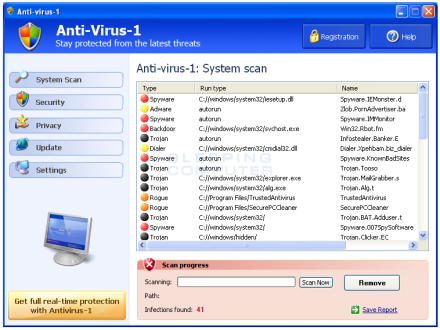 Also called smitfraud, scareware, or rogue security software, this type of software is defined as malware ?it is designed specifically to damage or disrupt a computer system. In this case, not only is the software going to disrupt your system, it’s going to try and trick you into making a purchase using your credit card.

This specific type of malware appears to users in the form of a fake Windows warning on your computer system that reads you have a specific number of viruses on your computer (usually in the hundreds) and that this software has detected those viruses. To get rid of them you must download and purchase the full-version of the antivirus software. It’s important to remember that by purchasing the “claimed full version to remove the viruses” you will be submitting your personal information to unscrupulous persons and may also end up being a victim of credit card or identity fraud or theft.

The good news is that you probably do not have a computer that is infested with hundreds of viruses as the rouge software claims. The bad news is that the rogue antivirus software itself is on your computer and you must remove it, a process that is hindered as the rouge software usually locks the control panel and the the Add/Remove Programs function to prevent users from removing it. Other things that may be disrupted by the rogue software include being unable to visit reputable and valid antivirus and malware Web sites, being able to install legitimate antivirus software and also being unable to access your desktop.