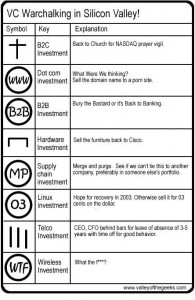 The act of making chalk marks on outdoor surfaces (walls, sidewalks, buildings, sign posts, trees) to indicate the existence of an open wireless network connection, usually offering an Internet connection so that others can benefit from the free wireless access. The open connections typically come from the access points of wireless networks located within buildings to serve enterprises. The chalk symbols indicate the type of access point that is available at that specific spot.

As a recent development, the debate over the legality of warchalking is still going on.

The practice stems from the U.S. Depression-era culture of wandering hobos who would make marks outside of homes to indicate to other wanderers whether the home was receptive to drifters or was inhospitable.