What does the term “Ping” mean? 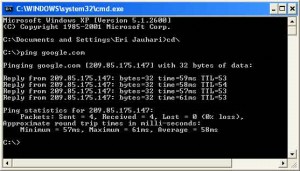 Basically, ping is short for Packet InterNet Groper and it is a utility that is most widely used to check for network errors. It’s the main utility that is used to verify whether or not a network data packet can be sent to an address (usually an IP address) without any errors.

Now, let me try to explain how a ping process works. First, a ping command is used to ping an IP address and that request is then sent over the network to the computer with that address. Once it’s successfully received, the computer produces what is called a “pong” response. The time between the two is then calculated to come up with an average response time. If the ping, for some reason, does not make it through to its destination, the computer will then receive a timed out error.

So, if you’ve ever received an error like that, you now know that it’s coming from the ping utility. The term ping is also used quite a bit in computer gaming. In this case, it goes by either a high ping or a low ping and it basically has to do with how fast of a connection a user has to the game server. For example, if you play games online, you’ll want to have a lower ping rate (around 50 is good). If you have too high of a ping speed, you may not be able to play, because a lot of game servers only accept low pings. Well, hopefully that helps you all in understanding this computer term a little more. As you can see, it’s all in the ping and the pong!