What is Trojan Horse 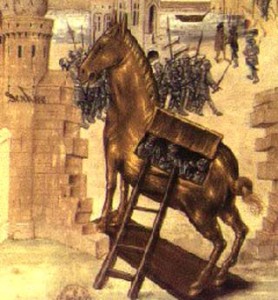 We’ve all heard or seen the story from Homer’s Iliad about the Trojan wars. In it the Greeks give a giant wooden horse to their enemies, the Trojans, supposedly as a peace offering. But after the horse is inside the city walls, Greek soldiers sneak out of the horse’s hollow belly and open the city gates, allowing their soldiers to enter and capture Troy.

Similarly, what is known as a Trojan Horse is a destructive program disguised as a simple application or useful program. The program contains additional hidden code which allows the unauthorized collection, exploitation, falsification, or destruction of data. Though lumped in with viruses, it doesn’t propagate itself like a virus does.

One of the worst kinds of Trojans is a program that claims to rid your computer of viruses, but instead puts them on your computer. Another common type will open a security hole for a hacker to get into your system and do all kinds of nasty stuff.

You can prevent getting a Trojan Horse by having up-to-date anti-virus software, not opening unsolicited attachments, and scanning freeware and shareware you download before you unzip.