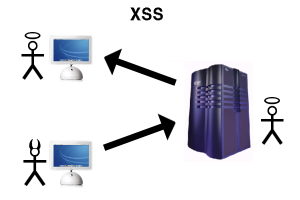 An abbreviation of cross-site scripting. XSS is a security breach that takes advantage of dynamically generated Web pages. In an XSS attack, a Web application is sent with a script that activates when it is read by an unsuspecting user’s browser or by an application that has not protected itself against cross-site scripting. Because dynamic Web sites rely on user input, a malicious user can input malicious script into the page by hiding it within legitimate requests. Common exploitations include search engine boxes, online forums and public-accessed blogs. Once XSS has been launched, the attacker can change user settings, hijack accounts, poison cookies with malicious code, expose SSL connections, access restricted sites and even launch false advertisements. The simplest way to avoid XSS is to add code to a Web application that causes the dynamic input to ignore certain command tags.

Scripting tags that take advantage of XSS include