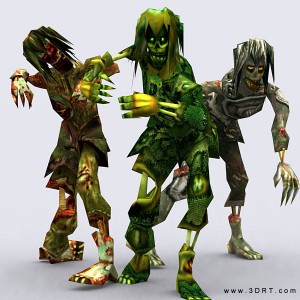 (1) A computer that has been implanted with a daemon that puts it under the control of a malicious hacker without the knowledge of the computer owner. Zombies are used by malicious hackers to launch DoS attacks. The hacker sends commands to the zombie through an open port. On command, the zombie computer sends an enormous amount of packets of useless information to a targeted Web site in order to clog the site’s routers and keep legitimate users from gaining access to the site. The traffic sent to the Web site is confusing and therefore the computer receiving the data spends time and resources trying to understand the influx of data that has been transmitted by the zombies. Compared to programs such as viruses or worms that can eradicate or steal information, zombies are relatively benign as they temporarily cripple Web sites by flooding them with information and do not compromise the site’s data. Such prominent sites as Yahoo!, Amazon and CNN.com were brought down in 2000 by zombie DoS attacks.

Zombies are also referred to as zombie ants.

(2) In UNIX operating systems, a zombie is a “child” program that was started by a “parent” program but then abandoned by the parent.